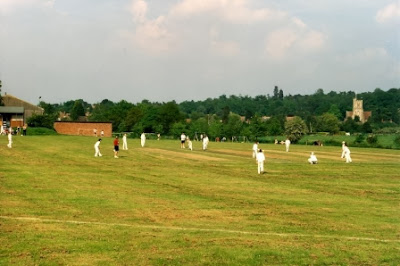 ....of a bygone age came to me in a book I`m currently reading.  The book is Stephen Chalke`s `The Way it Was,` and is a collection of more than 100 articles he wrote for Wisden Cricket Monthly, The Wisden Cricketer and The Times, providing glimpses of English cricket from 1946 onwards.

One reason I`m reading it for the second time is to help stave off the onset of the shorter days and longer nights that have arrived.  Before long, winter will be upon us with all its misery and my seasonal affective disorder (SAD) will drive me to seek therapy in cricket books and The Ashes series in Australia in an attempt to recapture the joy of those summer days in the sun.

The picture above shows a game of village cricket being played on the recreation ground in the village of St. Mary`s Platt here in Kent.   Beyond stands the church where Mrs. Snopper and I were married 52 years ago and behind the church the wind shaken wood, where we used to wander and and make our discoveries and where even now I quite often take Barney for his walkies.   And all those years ago, as now, cricket was a passion for me.   I used to captain a nearby village team who played on Sundays  and on Saturdays I played for Platt on the `old` recreation ground where we would stop playing football one week and play our cricket the following week on wickets that were consequently `interesting.`

My wife spent her childhood with her family in a cottage opposite the church and next door, in a much grander residence, lived the Barton family.   Michael Barton also played for the village team and such was his presence on the cricket field that he was always referred to as `Mr. Barton.` Small wonder really, for he had been captain of Surrey from 1948 until 1952, when Stuart Surridge took over from him.

Those were the days of the amateur captains and his appointment at Surrey came after a blue at Oxford, impressive displays for the Free Foresters and a successful career at Dunlop and he found himself captaining a team that included the Bedser twins, Bernard Constable, Laurie Fishlock, Arthur McIntyre, Jim Laker, Tony Lock and even a fledging Peter May.  But Barton turned out to be a successful and popular leader and his captaincy included a joint championship with Lancashire in 1950,  paving the way for Surridge to go on and lead Surrey to seven successive titles.

In all he played 147 games for Surrey, scoring almost 6,000 runs with a top score of 192.   After his spell as captain, he became a commodity trader in the City but retained his links with Surrey and became their President in 1983.  He died in 2006 at the age of 91 and when I next visit Platt churchyard I will make a point of seeking out his resting place.

Now I will refrain from calling the fact that I played in the same village team as him as a claim to fame, rather quite the reverse for, at the time, the dismissive ignorance of youth made me blissfully unaware that I was playing alongside a cricketer of such quality and prominence.   I simply never knew and, as I now understand the significance of that distant echo, I am left regretful that it is only now that I  appreciate just what a privilege was presented to me on that village green all those years ago.