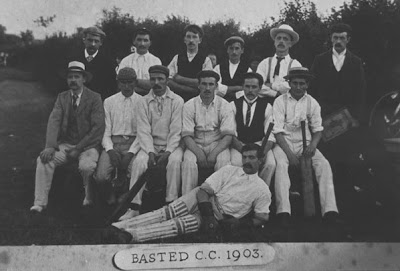 DEEP MID WICKET..
It was very tempting to go on about England`s Ashes victory﻿ in Australia, but I refrained from doing so partly to spare the feelings of my antipodean friends and partly because experience has taught me to treat those twin imposters of both victory and defeat  not only the same but also with caution.   In any event, Australia have infinitely more pressing matters to concern themselves with over the flooding in Queensland.
Nonetheless, watching the cricket unfold on television encouraged me to revisit my own personal shrine of the sainted game and so yesterday, I took Barney back to `my` old cricket ground from all those years ago.   It was well over 50 years ago that I played for Basted Cricket Club and, indeed, had the honour of being their captain before I was whisked away to spend 731 days at Her Majesty`s pleasure doing my National Service.  In those days, the club had its idiosyncratic ground on a hillside overlooking the Bourne valley deep in the Kent countryside.  The ground was owned by what was then Odhams Press, a large publishing organisation that had its distribution centre down the valley.
The cricket we played was simply for the fun and the love of the game - no leagues, no sledging, playing to win but not falling into despair if we lost, respecting the opposition  and just enjoying each other`s company in those idyllic surroundings.  We played on Sundays and on the mornings before the afternoon games, I used to go to the nearby Crowhurst Farm, borrow the tractor and hitch it up to gang mowers so the outfield could be made ready whilst others would be preparing the playing strip.  After the game, we would repair to the Golding Hop pub, just along the road, where the home made cider was so strong that the landlord would only ever sell you three half pints.
Yesterday, I noticed the changes half a century has brought.  The club moved years ago from the rough hewn ground at Basted to the more manicured surroundings of Tonbridge Sports Ground.  I hope the club is still going, in which case it is now well past its century.   Odhams Press ceased to be years ago and the ground, along with adjoining woodland where cabbage fields used to be, is now part of Basted Mill Woodland Walks - a semi-formalised recreation area.   It`s owned by the local borough council who, along with no less than three local parish councils, look after the area for public use.

There is a helpful notice board giving information about the flora and fauna to be found there and I noticed that even some of the trees in the woodland have little labels on them saying what kind of trees they are.  Mainly wooden ones, I guess.  All a bit formal perhaps, but at least the area will remain available for old romantics like me to visit, stand on where the square used to be, conjour up the sound of leather on willow and recall those glorious days all those years ago with good friends playing the beautiful game.
I stood there yesterday and wondered where all those team mates might now be - Eddie McKellow, Tom Merrit, David May, Dick Harvey and his brother Eric, Bernie Maycock, Jimmy Ford, Roy Willard, Norman Brown, Tony Allen, Brian Webb, Peter Clout and his Dad, Jim, who was our umpire, Peter Hudson and the rest, along with wives and girlfriends who made the tea.   I suspect and fear that most of them may now be in the great pavillion in the sky, but their memories still remain on that quiet Kent hillside where the game was played, the sun seemed always to shine and where the spirit of cricket and all that it meant was honoured and revered.